Most Iconic Cars from The Fast And Furious: 1969 Dodge Daytona

Before the 1969 Dodge charger Daytona was created to dominate Nascar, the 1968 Dodge Charger 500 was Plymouth’s chosen one but was deemed a failure. With the failure of the Charger 500, Plymouth’s high profile race car driver Richard Petty dropped them and decided to take his talents to Ford. The next race season the 1969 Charger Daytona was introduced in response to Ford’s Torino Talladega fastback. It sported the most notable ginormous 23-inch tall stabilizing wing in the rear and a more aerodynamic front end that was constructed out of sheet metal as well. With these changes the Daytona Charger didn’t only start winning, it was also the first Nascar vehicle to break the 200 mph mark leaving Plymouth with a winning formula. Plymouth later built from the Daytona charger and created the Superbird. Both machines broke many pole records of its time and this day still is one of the most recognizable Aero vehicles ever created.

In Fast and Furious 6 Tej and Hobbs attend an auction and buy all the vehicles and the 1969 Dodge Charger Daytona is one of the cars that they acquire. With Dom’s (Vin Diesel) love for Dodge Chargers, it was only fitting that he got some screen time behind this timeless classic. With 1969 Dodge Charger Daytona’s going for nearly one million dollars nowadays and the cast needing multiple cars for stunts it only made sense for the film’s car casters to use a replica version. Picture car coordinator Dennis McCarthy also slightly modified the appearance. This Dodge Charger received a one-piece fiberglass front with a slightly shorter nose, fixed headlights, slightly less elevated rear wing (12inches), and lowered over a set of custom-made 18-inch wheels. The Heart of this Charger May disappoint many Mopar fans, but it’s not powered by a Hemi or Magnum V8, but has a GM powered 6.2-liter LS3 V8 that produces 430 horsepower. It also ran a 500 HP NOS Supercharging kit. Most of these Chargers used a Turbo 400 which is a three-speed automatic transmission, but one was blessed with a built four-speed manual transmission. If this hasn’t made you Mopar fans too sick, wait there’s more. The power is put down using a Ford 9-inch solid-axle rear end with different gear ratios used depending on what that particular car was needed for the scene. With the rarity of these cars nowadays, the average lowest price you’re looking at picking one of these cars up is around $17,000, but in perfect condition, these Daytona Chargers can bring in from 231,000 to 900,000! 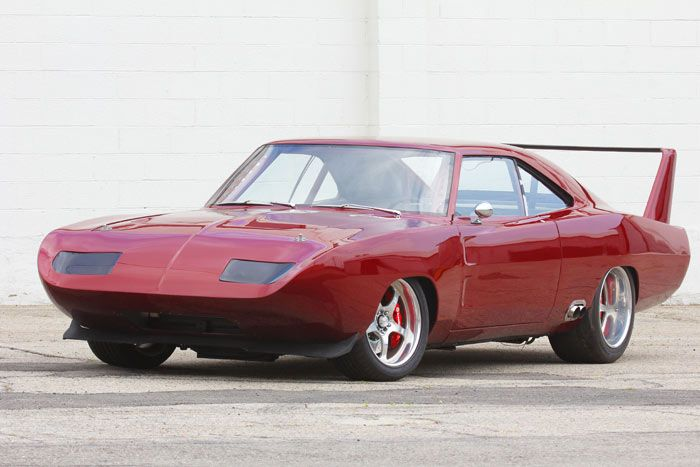